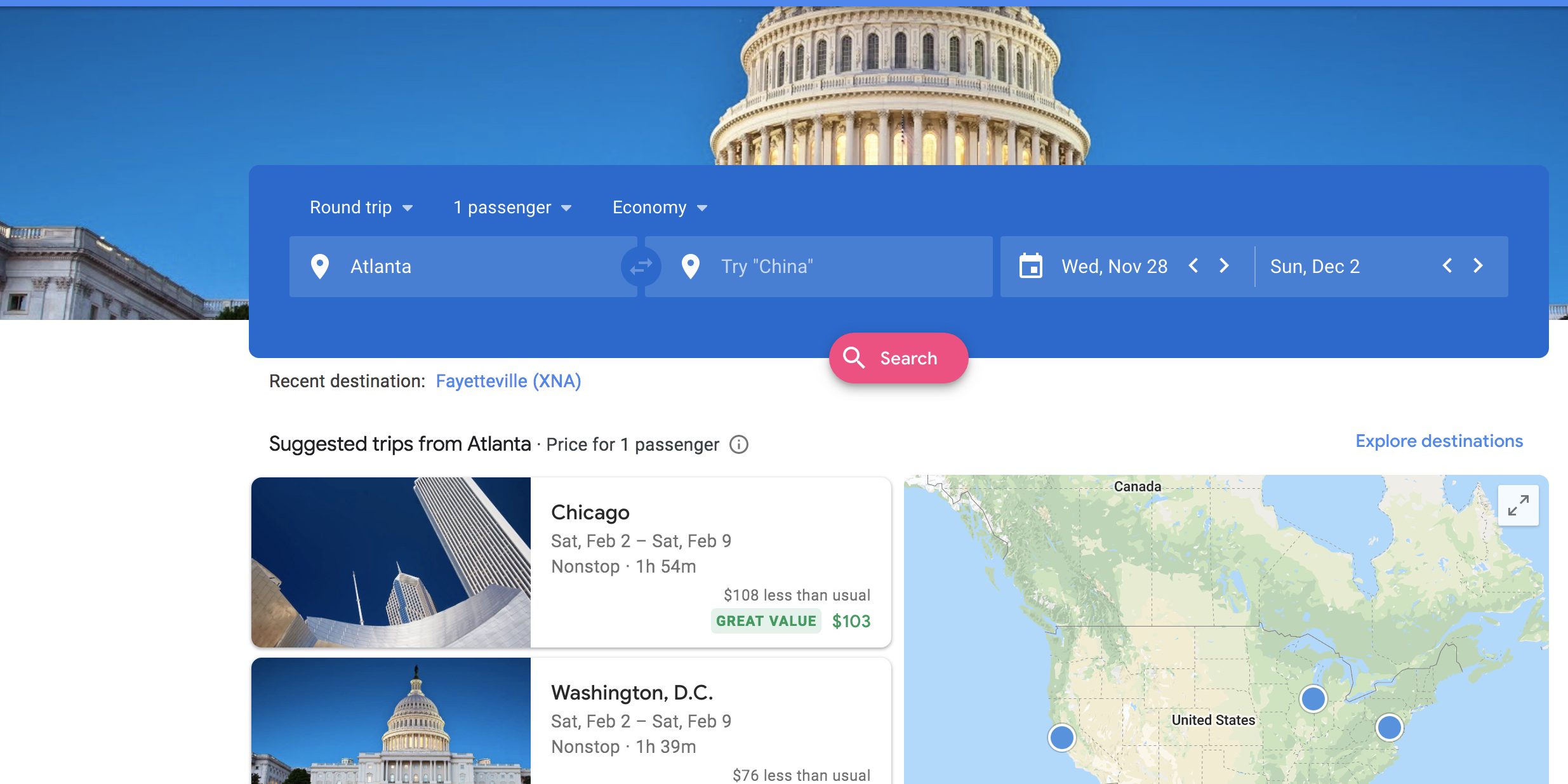 This is my current strategy for finding cheap flights. It takes some work, but I have had good results and saved money.

Expand your flight departure beyond Atlanta (assuming you’re near me, but this applies to other local airports near wherever you are as well depending on your driving time tolerance). Greenville, SC has an international airport that sees deals relatively frequently and is only 2 hours drive from Athens. The Charlotte airport is only 3 hours (or less) and also sees deals from American airlines that won’t be available from Atlanta. Utilizing multiple departure airports means a better chance of finding a good deal.

This is a commonly repeated tip, but be open to your destination. Find a deal and then figure out why you are going. Or have so many trips planned to so many different places that when a deal pops up, you already have a plan ready. I spend way too much of my free time planning trips and researching destinations.

If you find a good enough price, sometimes it can be worth it to just buy the ticket and save any points that you have. I usually try to never buy a ticket and just use points as much as I can, but sometimes a ticket will be so low, that it makes more sense to save the points and use them for something else. It really depends on where your points are located. Personally, I have had the best luck with Chase Ultimate Rewards points.

Many of the deals, especially the best ones or mistake fares will disappear quickly. For example, there was a flight a few weeks ago from Atlanta to several New Zealand destinations for ~$500 roundtrip (normally they are in the $1700+ range). It lasted about 15 minutes before it was gone.

As long as you buy a refundable ticket (many of the cheap ones aren’t refundable – pay attention when you buy it) at least 7 days in advance of departure, the US Dept. of Transportation requires US based airlines to offer one of two options: allow a passenger to cancel their ticket for a full refund within 24 hours of booking or allow the passenger to hold a ticket for 24 hours before payment. The airlines only have to offer one of these options. American Airlines (though they changed this policy in 2016 to the refund option) used to offer only the hold option. Meaning you had to choose that instead of entering payment info when buying the ticket. If you bought the ticket and wanted to cancel you were out of luck. Most other airlines (and now American) offer the 24 hour cancellation window. If you are considering an airline and it’s possible you are going to make a quick purchase on a ticket that you might want to back out of within 24 hours, it would be a good idea to confirm that particular airline’s policy.

I primarily use 2 services to get flight deal alerts. The first is Scott’s Cheap Flights (https://scottscheapflights.com/). There is a free version, but it’s worth the $5/month for premium, to me at least, to get more alerts and from multiple, specific departure airports. Actually finding the deals he sends can sometimes be difficult, but I’ve got a trick for that below. Scott’s service only provides deals Internationally with departures from the US. But his alerts are typically one of the first places you will find them. Many of the deals you find on Clark Howard or TPG or other sites were sent out days before on Scott’s service.

The other service is All The Flight Deals (https://alltheflightdeals.com/). You can enter multiple departure airports, and while Scott’s Cheap Flights only shows international deals, All The Flight Deals will show you domestic deals as well. You can just visit the website and refresh throughout the day, which is what I do. Or, you can sign up for email alerts. It is customizable as to when and how often you get the email. If you find a deal you are interested in, click on ‘See Dates’ where you will see a calendar of days where the deal was found. Select your departure date, and then instead of clicking on the price that appears next to your trip length, click on the down arrow. This will allow you to pick the service in which to book the flight. I prefer Google Flights. More on Google Flights below.

When trying to narrow down my search, or if I haven’t found a deal, but I have a narrower view on where I am trying to go, I like to use http://matrix.itasoftware.com/. This is also a helpful service when Scott’s Cheap Flights (SCP) sends out an alert to multiple cities from multiple cities. For example, sometimes an alert will go out with deals to a list of multiple cities, and from a long list of potential origin airports. But it also notes that not all origin airports have deals to all cities. So, lets say Atlanta, Charlotte and Greenville were all on the list of origin cities, and the destination cities included Venice, Bologna, Rome and Milan. Instead of trying to search each individual route (i.e. Atlanta – Venice, Atlanta – Rome, Greenville – Venice, etc.) with http://matrix.itasoftware.com/ you can enter multiple departure airports and multiple destination airports. And do it all with one search. On top of that you can pick a date, how many nights you want to be gone and it will show you a calendar view of the next 30 days with prices for each day, allowing you to find the cheapest day to leave. So, to continue our example, if you wanted to travel in June, you would put your departure airports as: ATL, GSP, CLT, and destination airports as VCE, BLQ, RME, MXP. Choose ‘See calendar of lowest fares and put in the earliest departing date that you would want to leave. Enter your length of stay and then search. Leave the passengers as 1 (regardless of how many are going), and edit the rest based on you travel preference. Unfortunately, you cannot book directly through the site. However, it will give you exact details of the flight you pick, including flight number. You can then take that info directly to the airline’s website or go through another travel service of your choosing. I usually try to then find the flight on Google Flights which directly links to the airline and makes it easy to buy the ticket.

Google actually bought http://matrix.itasoftware.com/, and incorporated the technology into https://www.google.com/flights/, but for big general searches I still like to go to http://matrix.itasoftware.com. Google search will allow you to search multiple origin/destination airports as well and provides multiple ways to view pricing. Where Google Flights comes in handy is if you have a larger travel window. You can pick dates and then cycle through upcoming months easily to see pricing details. Keep in mind that the price for a particular day, if you click it and choose a different return date, can change from what it initially shows you. There are plenty of other options to narrow your search (like if you want to see for a particular airline or exclude some, number of stops, etc.). Google Flights also allows you to set an alert for a specific itinerary – but you have to pick a set route, and specific travel dates. If the price drops below a set amount you will get an email alert.

One last thing to look out for – you will sometimes see some steeply discounted fares on carriers like Wow Air or Norwegian. These airlines nickel and dime you for everything. Checked bags will be ~$69 or more each way. Carry-on bags have a fee. If you want something to drink on the plane (which you might on a 9 hour flight to Europe) you have to pay for it. Pick a seat before boarding, another ding. In the end it’s possible that you will save $100 – $150 on a ticket over a full-service carrier, but often it’s less than that when it’s all said and done. Also be aware that some former full-service carriers (Icelandair is one) have copied a lot of these practices and have a much lower level of service than in the past.

Okay, one last, last thing. And this is where the multiple origin and destination on one search feature with http://matrix.itasoftware.comcomes in handy. Especially in Europe. Let’s say you want to go Switzerland. But the tickets from ATL are $800. But a ticket to Barcelona is only $400. You can often find a cheap local airline to get you the rest of the way. I wanted to go to Switzerland last summer, but the ticket was too expensive. Got the cheap ticket to Barcelona, enjoyed Spain for a few days, then bought a roundtrip ticket on Vueling (which was great service, BTW) for $79 from Barcelona to Geneva. Worked out much cheaper that way.

Hope all that helps somebody go on vacation somewhere this year for a little bit cheaper! And I know everybody who loves to travel has their own little secrets and ways of finding cheap airfares. Leave in the comments if you do – I’m always trying to learn new ways to go somewhere for cheap. And I should note I don’t have any affiliation with the companies listed above or receive any commission or preference from them. I just included them because that’s what I currently use.